Ani Mikaere has generously shared her paper on Maori leadership.  If you would like an email copy, please contact whaaingawahine@gmail.com

Wahine Maori Fight for the Human Right to Housing

Wahine Maori fight for the Human Right to Housing

Three wahine Maori , Robyn Winther, Huia Tamaka and Billy Taylor fighting Housing NZ
attempts to evict them from their homes because of their gang connections. They have
had their appeal dismissed by the Court of Appeal.

This has been a long and arduous fight through the court system. Te Wharepora Hou
would like to congratulate these women for their tenacity & strength in fighting these
evictions all the way to the Court of Appeal.

Attacks on the civil rights of ‘gang’ members & their so called ‘associates’ are thinly
veiled attacks on flax roots Maori.

Housing New Zealand is a public body. The Bill of Rights applies to every decision
it makes. The right to housing is a basic human right. These wahine have fought for
shelter for themselves and their tamariki. Housing New Zealand has no right to trample
over the freedom of expression and freedom of association of these women and the 13
tamariki that they care for between them.

We are witnessing the abandonment by the government of any responsibility for
people's welfare. The treatment of these women looks like another step towards the
future privatisation of HNZ.

Huia Tamaka, 33, said today she was trying to keep her spirits up for her six children.

"I'm a bit shattered. It's so unfair. I haven't done anything wrong. [HNZ] know no-one's
going to house us after this. I've got nowhere else to go, so it's to the bitter end for me. I
can't give in, I've got the kids to think of."

After hearing the ruling yesterday the three women vowed to fight on.

skype: temoananuakiwa
Posted by Whaainga Wāhine at 2:58 PM No comments:

MEDIA STATEMENT
Strong Opposition by Maori Women's Network to the Takutai Moana Bill
Te Whaainga Wahine the newly established organisation of Maori women call for the dumping of the new Marine and Coastal Area Bill (Takutai Moana Bill).  Spokes people, Denise Messiter and Irene Kereama-Royal confirmed the opposition by Te Whaainga Wahine to the new bill saying it has weak foundations and like  sand in the tide will significantly erode the treaty rights of all Maori.
This weekend, Te Whaainga Whaine will issue a direct challenge to the Maori Party members who currently support the bill, to actively acknowledge why they were elected by voting against the bill.
Te Whainga Wahine is committed to ensuring that Maori women’s voices are heard on issues and decisions that impact on whenua, whanau and hapu wellbeing and is calling for more accountability amongst Maori leadership
Media enquires:
Denise Messiter ph 07 868475 or 0276443359 email denise.messiter@xtra.co.nz
Irene-Kereama-Royal ph 0221571962 email ikereamaroyal@gmail.com
Posted by Whaainga Wāhine at 1:51 PM No comments: 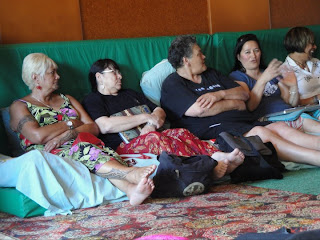 Deidre Nehua
"Nana told us that the building blocks of our whakapapa were built on the sounds of birthing. When the Christians learnt of  this they began to learn our reo was ‘a e I o u’ as it was ‘IO’ but the Christians did not accept that a culture could be derived from ‘IO’.  Our atua became male when Christians arrived; however they were genderless not tane only; the atua moved into tane roles and wahine roles when required.  We need to reclaim our rangatiratanga over our spirituality"

"affirming that indigenous peoples contribute to the diversity and richness of civilizations and cultures, which constitute the common heritage of humans’…however the ‘humans’ aspect have been removed.  These are some of the crucial failings of the UNdRIP of which New Zealand has signed, it is far removed from the original intent of which many peoples, spent many years advocating.  It is a poor replica of what the indigenous peoples have dreamt and fought for for many years.  It is my belief that it should Nations should remove support for it immediately"

My work with working people and working poor, of which the majority are not in Unions, are that our women will organise themselves as being in unions.  Organisation is important when trying to engage in change, so working with your community is crucial to learn and grow and create change.  What I'd like us to consider is how do women keep healthy and political, it is this energy that politicises both men and women.  And it is crucial that women are politicised and participating at all levels because we can bring a perspective that is grounded in our values, whānau, tamariki, whenua, taking care of the whenua. 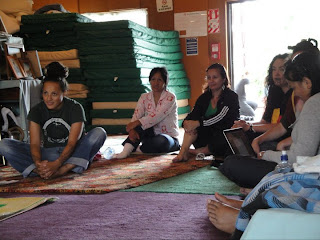 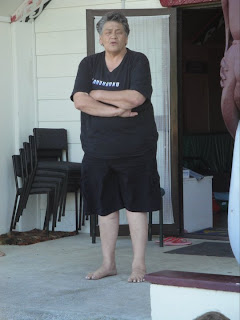 "Runanga are all constructs of the crown; I’m concerned with redefining us by the crown i.e. iwi organisations are crown; and the marginalization of hapu. Economic sovereignty has become the primary belief to achieving tino rangatiratanga and the basis for political control" 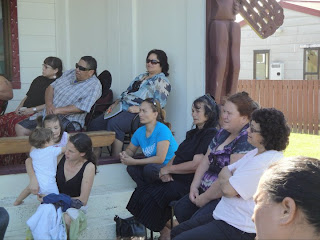 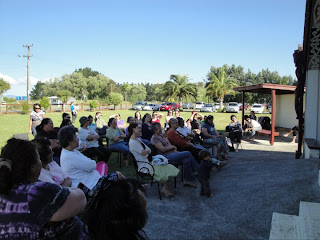 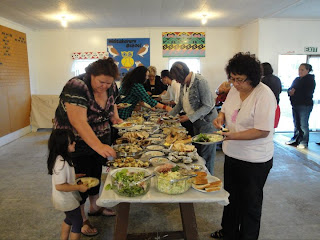 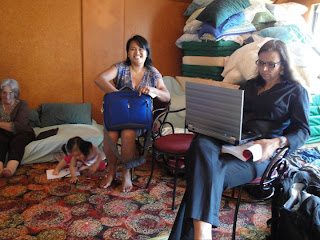 (Right) Professor Karina Walters, of the Choctaw Nation of Oklahoma from Great Turtle Island who spoke about historical trauma, the creation of lateral violence and the impact on  Indigenous Women. 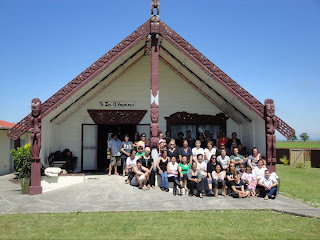 Posted by Whaainga Wāhine at 8:24 PM No comments:

The absence of Wahine from the highest levels of decision making processes has been noted at all levels.  This comment from Prime Minister, John Key as reported by Radio Waatea, Wed 1 Dec 2010,

Prime Minister John Key says a new group which aims to give Maori women a greater say in policy could make a valuable contribution to politics.

Te Whaainga Wahine was formed at a national hui at Thames on the weekend, and immediately launched a salvo at the Iwi Leaders Group and the struggle women have to be heard in traditional Maori forums.

Mr Key says he has noticed a shortage of women in the Iwi Leaders Group.

“Nayda Glavish tends to turn up but you don’t see a lot of other women there necessarily in those leadership positions. You can always do with some more and I think there are some extremely talented Maori women that I see in a variety of forums that I go to. You can see that they are the leaders of tomorrow so we shouldn’t give up home that there is a category of female leaders coming through in Maoridom like there is in the rest of New Zealand,” Mr Key says.
Posted by Whaainga Wāhine at 7:42 PM No comments:

Posted: December 2, 2010
Ms Turei says it’s the sort of initiative that is needed in what is a time of massive economic and political change affecting Maori women and their children.Te Whaainga Wahine was formed at a national hui in Thames over the weekend to help women speak out at local, national and iwi level.

Posted by Whaainga Wāhine at 7:16 PM No comments: